Deliverers will go up on Mount Zion to govern the mountains of Esau. And the kingdom will be the LORD’s.    Obadiah 1:21

The bride belongs to the bridegroom. The friend who attends the bridegroom waits and listens for him, and is full of joy when he hears the bridegroom’s voice. That joy is mine, and it is now complete.   John 3:29

End of days is now

Civilization as we know it is coming to an end.  Expect it to change drastically in the years ahead.  For our present age, it is the end of days.  For many, to call it “the worst of times” would be an understatement.  For others it could be the best of times. 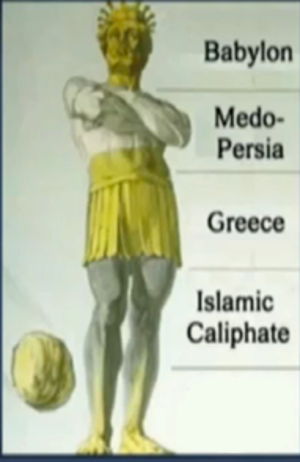 In the time of those kings, the God of heaven will set up a kingdom that will never be destroyed, nor will it be left to another people. It will crush all those kingdoms and bring them to an end, but it will itself endure forever.   This is the meaning of the vision of the rock cut out of a mountain, but not by human hands…The great God has shown the king what will take place in the future. The dream is true and its interpretation is trustworthy.

See this explained in the video below.

If you read Matthew 1, it says that there are 42 generations leading up to King Jesus. However, when you add up the generations listed, there are only 41.

Read what Isaiah 53 says about the 42nd generation: Yet it was the Lord’s will to crush him and cause him to suffer, and though the Lord makes his life an offering for sin, He will see His offspring and prolong His days, and the will of the Lord will prosper in His hand. Isaiah 53:10 (emphasis mine)

Ancient of Days came and pronounced judgment in favour of the holy people of the Most High, and the time came when they possessed the kingdom.    Daniel 7:22

Who are this holy people?  How will they possess the kingdom?  Many have the chance to be among them for “Many are called, but few are chosen.    Matthew 22:14”

Will you be among those few who are choosing to be chosen?

And she brought forth a man child, who was to rule all nations with a rod of iron: and her child was caught up to God, and to his throne.  And the woman fled into the wilderness, where she has a place prepared of God, that they should feed her there a thousand two hundred and three score days.    Revelation 12:5-6

Revelation 12 is about the end of days, of this present age.  The woman clothed with the sun in Revelation 12 is the church.  Her child was caught up to heaven to be prepared to take care of the church for three and a half years.

If you want more insight into this entire end of days blog post, listen to the entire sermon by Neville Johnson.

One thought on “End of Days As We Know It, Neville Johnson”