Who is the Holy Spirit? 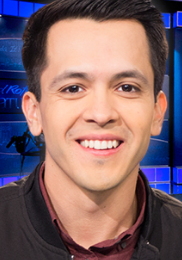 David Hernandez learned as a teen that the intimate Holy Spirit wants to be sought. He learned about fellowship, power and friendship with the Holy Spirit.

He learned that the Holy Spirit:

How to develop a relationship  with the intimate Holy Spirit

To develop intimacy with the Holy Spirit, learn to be silent & still.

Go to a private quiet place to pray. Silence is the putting away of outer distractions.

Be still & know that I am God. Psalm 46:10. Stillness is the quieting of the soul. In stillness we give our burdens over to the Lord. We have to focus our attention on what the Holy Spirit is showing us, not on what is happening on the outside.

Meditation on the Word of God helps this process. Meditate of the revelation of the Word that the Lord has given to you. That brings about a stillness of the soul that helps the Holy Spirit work in you.

David Hernandez was ministering in a meeting where the power of the Holy Spirit was really obvious. There were waves of glory.

David focused on a man at the back who was worshipping with one arm in the air. The Lord said He wanted to heal the man. David just did not know what the infirmity was.

He later found out that the man had once had cancer in his neck. Surgeons removed a muscle in his arm and moved it into his neck so that he could move his head.

David prayed for the arm. It was totally healed and the man could lift both arms into the air.

7 angels give her healing words

Becky Dvorak has seven angels that follow her to where she is ministering with her healing words. One of the angels has a little book. He reads from the book into her ear. After he finishes reading, she repeats whatever he said.

Sometimes she hears the Holy Spirit speak into her ear. She may even feel His breath. Then she repeats what he says. That is very prophetic.

Once when Becky was ministering, the Spirit of God asked her to call out arthritis. She told people with arthritis to come forward. Around 100 people did.

There were so many that Becky asked them to hold hands. She released the healing power of the Holy Spirit into their joints. She commanded the swelling and pain to be gone.

Virtually everyone was instantly healed.

Someone from Europe emailed Becky Dvorak to say that she had a brain tumour. Becky emailed her back and told her to start prophesying over her body:

She prophesied Becky’s points over herbody multiple times that day.

The next day she went to see a group of doctors who were to be operating on her brain. They were confused. The x-rays showed that the tumour was gone.

Watch the rest of this story in the video below.

Sometimes is extremely valuable to have honed you ability  to hear the Lord’s voice. For instance, Becky Dvorak had a severely autistic child. Then one day she heard the Spirit of God say, “Take your authority over that autistic spirit now!”

She pointed at the child and said, “In Jesus’ name, I renounce that autistic spirit. I command you to come out of him now.”

The boy was instantly healed and never ever had another autistic episode.

Creating a muscle that had not existed

When the presence of the Holy Spirit is thick in David Hernandez’ meetings, awesome miracles can happen.

In one case David was inspired to call someone to the front. He was unable to lift one arm because part of the muscle had been surgically removed. The muscle was supernaturally restored.

Watch this miracle in the video below.

Who is the Holy Spirit?

The Holy Spirit is the One who:

And there’s more. Learn about them in the video below.

How to Develop a Relationship with the Holy Spirit

Getting close to the Holy Spirit requires silence & stillness. Silence is the putting away of outer distractions. Stillness is the quieting of the soul (mind, will, emotions, etc.)

It’s a good idea to go away privately. Then, when you go away to someplace quiet and get a revelation from the Holy Spirit, meditate upon it.

This is explained much more fully in the video below.

How to Retreat into Your Spirit

May your whole spirit and soul and body be kept blameless. 1 Thess. 5:23b

You have to retreat away from your body & soul and retreat into your spirit. You do that by meditating on the Word of God. You capture the revelation, the Holy Spirit breathes upon the Word and causes creation to take place.