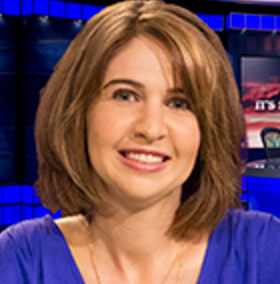 Ana Werner is a new covenant seer. A seer is a person who hears and gets wisdom from the Lord. This comes primarily using the sense of sight.

For instance, once Ana was praying for a group of people in church and saw lots of bruising around someone’s shoulder. No one else could see it.

So, she knew that she was to pray for the shoulder. It got healed.

Ana Werner started supernatural experiences at age 5. That’s when she saw her guardian angel. They talked to each other and even prayed together.

Years later her guardian angel showed up while she was lost in a very rough neighbourhood. He showed her how to get home.

Seeing words in the air

Sometimes Ana Werner sees English words in the air. They may represent why a person does not receive their healing. It could be something such as unforgiveness, bitterness or hate.

It could be the condition such as cancer that the person has.  Whatever it is, the words will be guides for Ana telling her how to pray.

How Ana developed her gift

Ana Werner started by spending 10 minutes a day being led by the Lord. Now she spends more time talking to and waiting on the Lord. She would ask to experience him with her senses.  She would journal what she experienced.

You have not because you ask not

When Ana was in heaven once, she saw some angels going down to earth on assignments. Other angels were just standing around waiting. Ana was told that they were waiting for people to ask for things in prayer.  They could not go and help until people prayed asking.

Watch the complete interview between Sid Roth and Ana Werner.