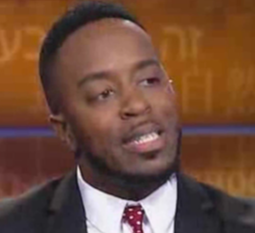 At age 7, Hakeem Collins’ grandmother introduced him to Jesus Christ. At church he could see a translucent angel behind the pastor.

This led to one supernatural event after another. Many years after that day at age 7, he was invited to speak in a church.

Many disabled people began to walk in. He ministered to a blind man. Not much happened.

Then he began to prophesy. He told the man that he would be able to see in 7 days. His prophecy came true.  Watch the story in the YouTube video below.

Prophecy to change your destiny

We can bring heaven to earth by what we speak prophetically.  God has a destiny for each of us.  Sometimes that destiny will not come to pass unless it has been prophesied over us.

This is explained more fully in the YouTube video below.

Prophetic words displayed in the air

In the spirit Hakeem sometimes sees words hovering over people’s heads.  For instance, he gave an example of seeing the word “cancer” over a woman’s head.  He prophesied that the cancer would disappear and it did.

Hakeem Collins and Sid Roth were in a restaurant.  Hakeem began “reading the waitresses mail”.  He told her about the trauma she had been in and that she would be moving to another state.  He told her enough that she began to cry.

Sid Roth led her to the Lord.