Open portals available to all 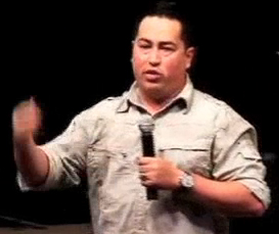 Jerame Nelson experiences the open portals (gateways) of heaven. He says it is available to all believers.

Believe for an intimate relationship with the Lord accompanied by His revelation. Then we can open up the portals for heaven to invade earth.

The best example of a portal in the Bible is in Matthew 3:16-17.  It says: As soon as Jesus was baptized, He went up out of the water. Suddenly the heavens were opened, and He saw the Spirit of God descending like a dove and resting on Him. And a voice from heaven said, “This is My beloved Son, in whom I am well pleased!”

Brain damage & rods in her back

At one of his meetings, Jerame Nelson got a word of knowledge about a woman. She had been in a car crash 2 years previous. He called her forward.

She explained that she had brain damage and metal rods in her back and legs. As Jerame was about to lay hands on her, Jesus appeared in a vision. He said, “This one’s mine.”

Jesus healed her  brain and gave her the ability to run. Watch more in the video below.

At one of Jerame Nelson’s healing meetings, a shaft of light came down. It shawn upon a boy with cerebral palsy. When the light hit the boy, he was instantly healed. He could walk & talk normally. Even his facial features changed.

Car went through a car

Jerame Nelson was driving through a green light. Meanwhile another car was going through a red light and heading right for him at around 50 miles an hour.

He just yelled, ” Jesus!” One of the cars dematerialized and went right through the other one without any damage.

Jerame asked the Lord what that was all about. He told Jerame that He had to save him because he had so many more souls to save.

Jerame asked for a biblical reference. The Lord told him about about the angry crowd that was about to throw Jesus off a cliff. The Bible says that Jesus walked right through them.